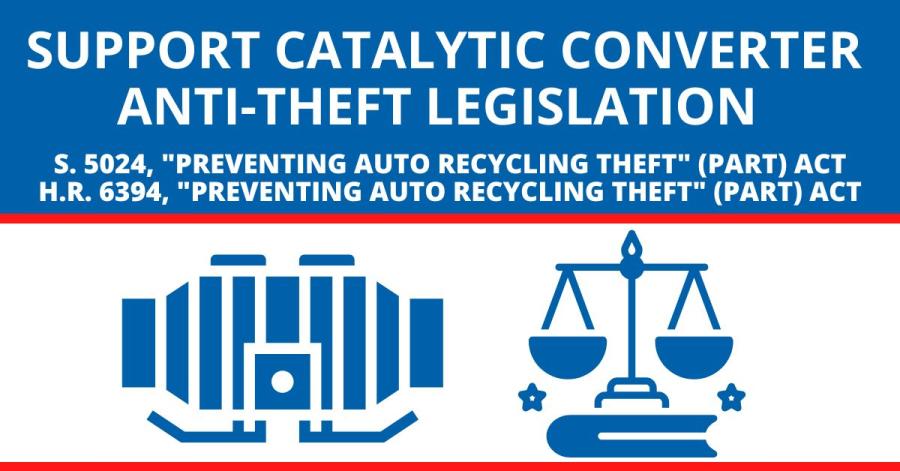 NTEA — The Association for the Work Truck Industry announced support for legislation to combat the rise in catalytic converter theft.

A companion bill (H.R. 6394) was introduced by U.S. Representative James Baird (R-IN) in the House of Representatives earlier this year.

"Theft of catalytic converters and other precious metals is widespread in our country and is costly to victims of such theft," said Steve Carey, NTEA president and CEO.

"This legislation is a step in the right direction in addressing this problem. NTEA applauds the efforts of Sen. Klobuchar and Sen. Wyden, as well as Rep. Baird, and encourages industry companies to support this important effort by contacting their legislators."

In a press release, Klobuchar noted that catalytic converters are used to reduce the potency of toxic emissions from an internal combustion engine and required for vehicle compliance with the Clean Air Act. According to the National Insurance Crime Bureau, catalytic converter thefts rose by more than 325 percent from 2019 to 2020. Replacing these parts imposes significant financial costs to vehicle owners, and can even result in a total loss to the vehicle.

The PART Act would:

The Volvo Group and Pilot Company, the largest operator of travel centers in North America, have signed a Letter of Intent to develop a national, public charging network to support the scaling of battery-electric Volvo VNR Electric trucks.

Executing a key component of its strategic growth plan, Curry Supply Holdings has finalized the asset sale of its subsidiary, CS Trucking LLC.

Volvo Trucks North America will enter its 21st consecutive year as the exclusive sponsor of the America's Road Team public outreach program in 2023.

Volvo Trucks North America hosted Penske Truck Leasing executives at the Volvo Trucks Customer Center in Dublin, Va., to commemorate the delivery of the 25,000th truck in a partnership that has spanned the last two decades.

Grote continues its refocus on creating and leading safety-related innovation with the addition of three experienced members to its leadership team.