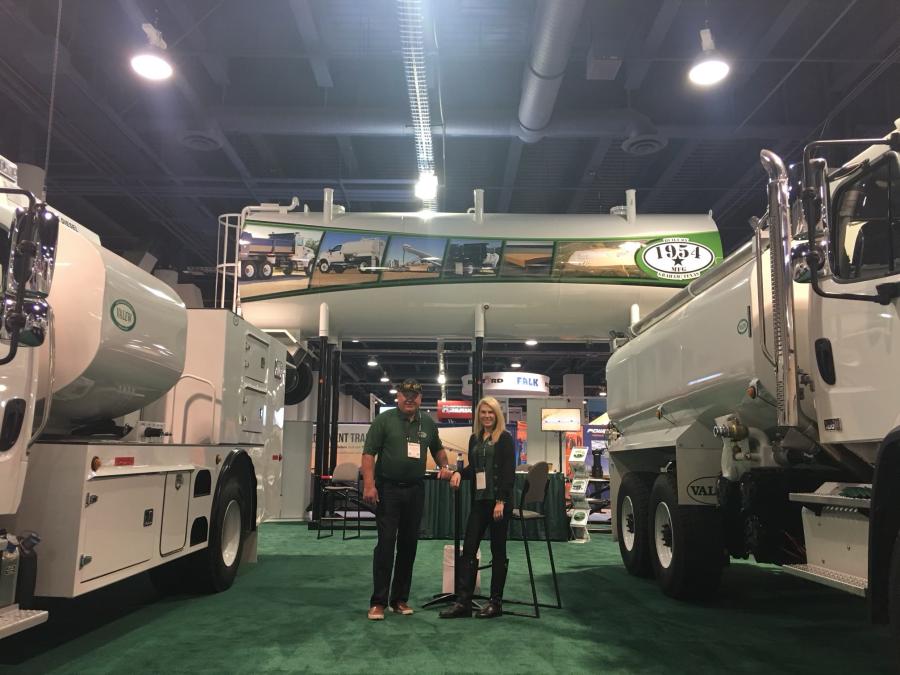 Roger Hayes (L), CEO of Valew, and Courtney Hayes, COO of Valew. Courtney is slated to take the reigns at Valew over the next few years. (Photo courtesy of Valew Quality Truck Bodies.)

Valew Quality Truck Bodies, the long-time manufacturer of Valew Water Trucks, recently was awarded a patent for its new baffling system and the production on the new system was introduced this year on both its 2,000-gal. and 4,000-gal. trucks.

Over decades of building water trucks, Roger Hayes realized that there were costly problems with traditional baffle designs.

According to Hayes, CEO of Valew Quality Truck Bodies, "traditional materials used for baffles are pricey and made of steel — which often rust, and most manufacturers don't weld their baffles in place which causes them to fall." 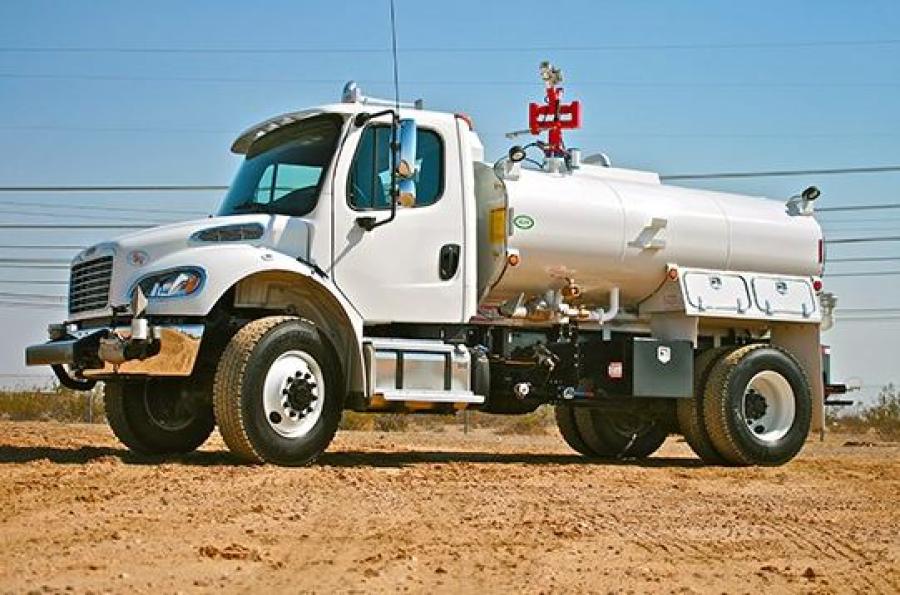 Hayes reasoned that there must be a better, safer solution that also would offer greater durability. So, he came up with the idea of a composite (plastic type) baffle, which he hoped would result in the "safer and more durable product we were looking for."

Hayes and a team of engineers put the idea together, tested it over the course of several years and based on the testing, decided to patent it.

Hayes said the patented process offers benefits to the end user, but also to Valew and its employees.

"This new process is ultimately safer for our employees, requires less welding inside tanks and less confined space training," he said. "It is also made from a composite that will last longer than typical baffle designs. This design is easily replaceable and allows for replacing one or all of them simply and efficiently. It is a very easy bolt in process."

Hayes described the baffles as, "round, which keeps the water spinning like a washer, where you won't have the issues of other baffle designs where the water shift shakes the truck and creates instability."

Each baffle holds 50 gal. of water and a truck can have 6 to 12 baffles, depending on its size. This design, being lighter in weight, offers improved safety, both for the driver and those involved in its production, according to Hayes.

"The cost savings for the customer is that there is no need for additional load capacity compared to steel baffles which add additional weight and, in this business, every gallon counts," Hayes said.

Compared to steel baffles, the patented composite parts are much cheaper to replace and that will result in additional long term savings to the contractor.

"It is a big process to replace steel baffling," Hayes said. "You must go in the tank, cut it out, you need confined space training, you need to perform a test on the tank to make sure that it didn't have any hazardous materials in it. With Valew's new baffles, you basically unbolt the top of the tank and it's wide open and you can simply replace the baffle. You do need to have fall protection and proper safety equipment, but the baffles are easily replaceable."

Valew Quality Truck Bodies has been family-owned for 65 years. Hayes is the current CEO and is part of the third generation currently operating the company.

It all began in the early 1950s when brothers John R. Hayes and Vernon L. Hayes, from Oklahoma, went off to serve in the Korean war.

While they were serving in the war, their father, John H. Hayes, moved to California and started a welding shop. When the brothers returned from their military term, they joined their father and began working in the shop as welders and other repair work in the oil field. 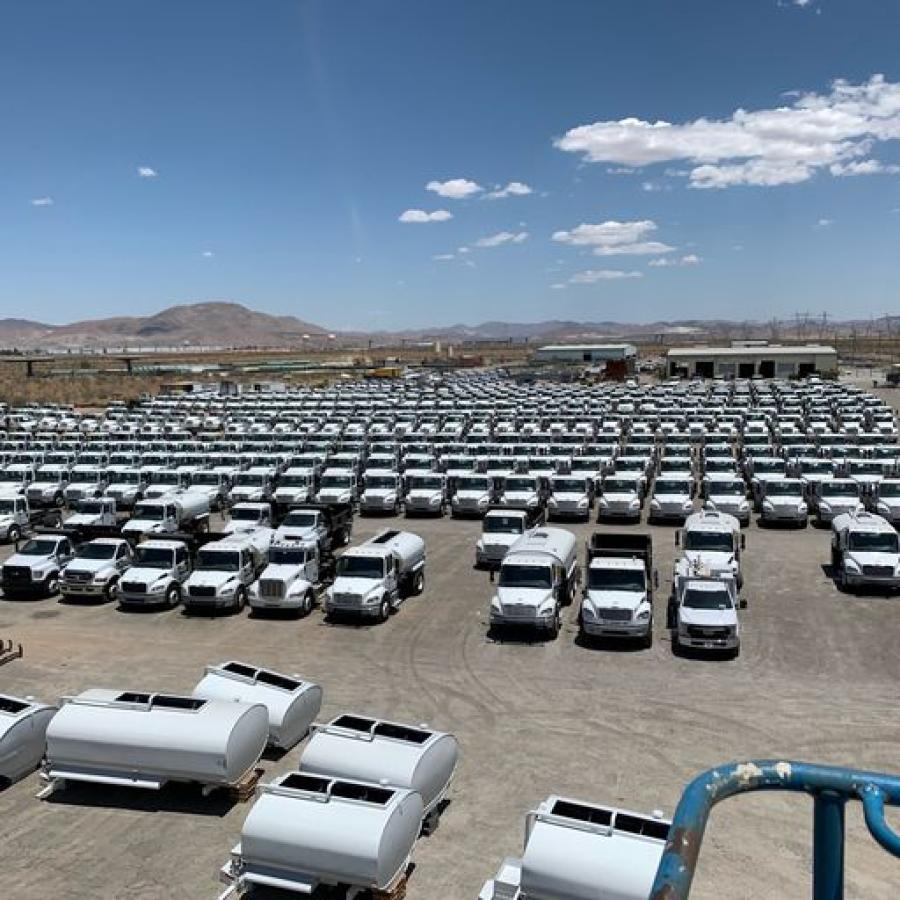 By the early 1970s, John H. and John R. retired from Hayes Welding and Vernon began to grow tired of the constant travel required for their business. Vernon got to the point where he just didn't enjoy the travel anymore and wanted one place that he could go to everyday. He started basing his business out of Paramount, Calif., and began building the products Valew is now known for.

The Hayes family is a family of thinkers, problem solvers and inventors. With the gas crisis in the early 1970s, Vernon saw a need for pick-up trucks to have a larger capacity to carry fuel and created a solution known as saddle tanks, which were two fuel tanks added on the right and left on the main fuel tank, located behind the driver seat.

In or about 1978, Vernon started focusing more on building water trucks. He then purchased Valew from Jim Valentine in the late 1970s. At that time, they were selling approximately 35 water trucks per year, it was a small organization with about 3 to 4 employees. Vernon continued to concentrate on growth over the next couple of years until his health would not allow him to devote the same amount of time to the business.

Roger, Vernon's son, took over the business in 1984 and continues to run it today. He has been the CEO for the last 18 years.

When Roger took over the business in the early 1980s, he focused on building relationships with key suppliers. This continues to be their business philosophy. Roger maintains that their business is a relationship-based business, at all levels — vendor, employee and customer.

"It's important to treat your vendors well, pay your bills and maintain a positive business relationship, so that when times are tough, they are more likely to say, ‘we need to take care of this guy' and we are often at the front of their list," Roger said. "It's important to not burn bridges with vendors or suppliers. This has proved to be correct during recent supply chain issues affecting so many businesses over the last few years."

This also is Hayes philosophy with employees.

"If you treat them right, they are more likely to work as a team through tough times," he said.

Roger guided the company's growth from just 25 trucks per year to thousands of truck bodies per year. In addition to water trucks, they've become a leader in the production of dump trucks and trailers, water towers, fuel and lube trucks, service and mechanics trucks and ready tank kits.

The growth has necessitated increased production capabilities and the company now operates plants in California and Texas.

Valew maintains an inventory of approximately 600 trucks while selling thousands each year.

Looking to the future, Roger and his team have other patents in the preliminary stages that involve innovations in water trucks.

Roger is looking at the next generation and will be putting the company in the capable hands of his daughter, Courtney Hayes, COO. She will take over as CEO soon and will represent the fourth generation of company leadership.

Volvo Trucks are running tests of fuel cell electric trucks that only emit water vapor and have an operational range comparable to diesel trucks, up to 1,000 km.

Hydrema, an articulated dump truck manufacturer, continues to build its dealer network with the addition of M&D Truck and Equipment Sales, headquartered in Monroe, Wis.