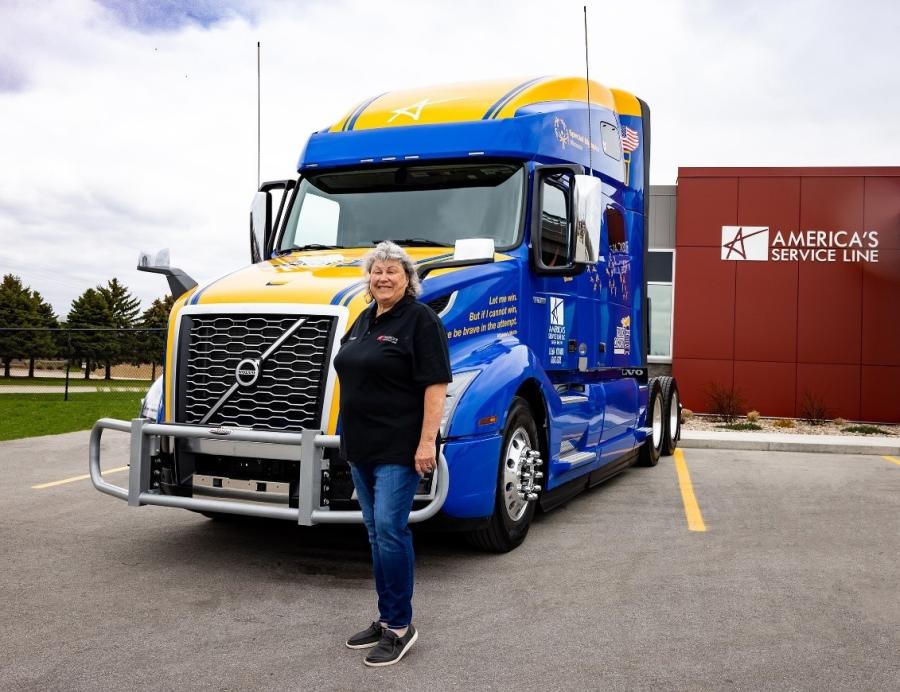 In acknowledgement of her many industry and community accomplishments, professional truck driver Carmen Anderson was presented with the keys to a new Volvo VNL760 70 in. sleeper specially wrapped to help raise awareness of Special Olympics.

The handover event was held at the headquarters of America's Service Line (ASL) in Green Bay, Wis., a private truck fleet of 200 heavy-duty trucks and 350 refrigerated trailers for whom Anderson is currently a company driver.

In addition to being behind the wheel professionally for more than 21 years and logging more than 2 million accident-free miles, Anderson was named a Women In Trucking's Top Women to Watch in Transportation in 2021. In 2019, the Wisconsin Motor Carriers Association (WMCA), a non-profit trade association based in Madison representing commercial motor vehicle users, named her Truck Driver of the Year, the first woman to win the award not only in Wisconsin but in any state.

Anderson has long been active not only in supporting Special Olympics, but in promoting highway safety as well via her service as a member of the WMCA Road Team. She also is actively involved in Truckers Against Trafficking, which works to quell human trafficking across the country, as well as the Trucker Buddy program, dedicated to helping educate and mentor schoolchildren via a pen pal relationship with professional truck drivers.

Kriete Truck Centers, headquartered in Milwaukee, family owned and operated for more than 70 years with ten medium- and heavy-duty truck sales and service locations across Wisconsin, partnered with ASL in obtaining the new Volvo truck that Anderson will now be driving.

David Kriete, president and CEO, serves on the board of Special Olympics Wisconsin (SOWI), which was established in 1972 to provide year-round sports training and athletic competition for children and adults with intellectual disabilities.

Travis Stuckart, who has been a Special Olympics athlete for two decades and will serve as an athlete-coach in softball for Team Wisconsin at the 2022 Special Olympics USA Games in Orlando, took part in presenting Anderson with her new Volvo truck at today's event.

Featuring Special Olympics branded graphics, the truck, with Anderson behind the wheel, will be featured in SOWI's annual Truck Convoy, taking place on Sep. 17, 2022, with Kriete Truck Centers as the presenting sponsor: truckconvoy.org.

"As a long-time supporter of Special Olympics, and all the professional truck drivers out there every day delivering life's essentials, we at Kriete Truck Centers are thrilled to be part of this effort," said David Kriete. "Carmen is a shining example of what can be accomplished through hard work and a commitment to serving others, values that are at the core of our culture at Kriete as well as Special Olympics."

The VNL760 features a Volvo D13 425 hp engine with Turbo Compounding and a Volvo I-Shift automated manual transmission, working seamlessly together to maximize fuel economy, lower emissions and reduce driver fatigue. Safety features include collision mitigation with lane deviation alert and a Rolltek seat with side curtain air bag. Long haul drivers like Anderson, often on the road for several days at a time, appreciate the vehicle's numerous comforts of home, like a reclining bunk with memory foam mattress and refrigerator, the company said.

"I'm honestly taken aback by all the attention, the chance to drive this beautiful truck, and the opportunity to further spread the word about all the great things Special Olympics does," said Anderson. "Volvo is known for high performing, safe trucks with the latest technology, and we're sure to get lots of envious looks from fellow drivers traveling America's highways."

Volvo is now introducing fossil-free steel in its trucks. The steel is produced by the Swedish steel company SSAB and the heavy-duty electric Volvo trucks will be the first to include it, the company said.

Volvo Trucks North America has announced a new powertrain innovation with the Volvo I-Torque. Now available as an option with the latest D13 Turbo Compound engine, I-Torque is designed to achieve fuel efficiency, without compromising performance, drivability and productivity, according to the company.

Volvo Trucks North America continues to lead in the deployment of sustainable Class 8 zero-tailpipe emission vehicles for the North American trucking industry with ongoing deliveries of its Volvo VNR Electric model to fleets across the country.

Many of us have experienced it — the battery in the phone loses power when the blistering cold sets in.

Daimler Truck AG and Volvo Group officially outlined their pioneering roadmap for the new fuel-cell joint venture cellcentric, as part of an industry-first commitment to accelerate the use of hydrogen-based fuel cells for long-haul trucks and beyond.

Easton Sales and Rentals, a U.S. Terex Trucks dealer, has won the 2020 "Top Dealer Award". In a challenging year, the family-run dealership achieved outstanding results and sold a significant number of articulated haulers, bringing the Terex Trucks TA300 and TA400 to more U.S.