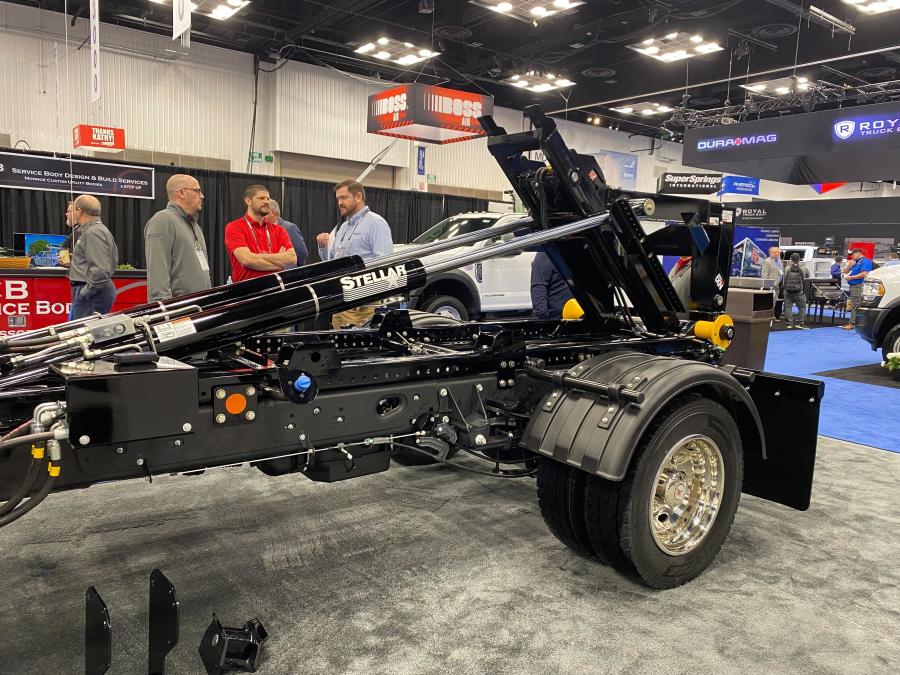 The NXT18 will be the first in the new series to come equipped with electronic controls for more efficient operation of the hooklift.

Stellar, an employee-owned and operated manufacturer of mechanic trucks and cranes, tire service trucks, hooklifts, roll-off cable hoists, trailers, and service truck and van accessories, announced the next evolution of telescopic hooklifts with the NXT Series.

This strong, but lightweight unit is capable of loading, unloading and dumping various truck bodies, according to the manufacturer. The NXT18 is the first telescopic hooklift in the new NXT Series and features a Z channel base design and a universal body latching system.

Completely manufactured in the United States, the NXT18 is an 18,000 lb. capacity hoist, built for a class four through seven chassis. The unit has a 35.63/54-in. hook height and rectangular style secondary jib.

With approximately a 7.5-in. lost load height, Stellar offers the lowest profile in the industry, providing a lower vertical center of gravity and the ability to accommodate down to 4-in. sub-frame heights, the manufacturer said.

The universal body latching system is completely flexible with inside and outside locks that can be moved by unbolting, repositioning and bolting back down. This allows the user to position the body locks in specific locations to accommodate body locks that may not be in the correct spot. The versatility of this system eliminates the need to cut locks off, re-weld or repaint.

Not only does the NXT18 have a universal latching system, but also a universal hydraulic reservoir. The reservoir can be mounted in four different places: bulkhead mount or chassis frame mount on either the street side or curbside of the unit. This removes any workaround needs if there are chassis items that could interfere with the reservoir mounting.

"With a culture of innovation, our team has done it again. We are really excited about the prospects of the new NXT Series and how much this will evolve telescopic hooklifts now and into the future," said Tim Worman, senior product manager at Stellar. "Our telescopic jib and secondary design on the NXT series allows us to be more compact than ever before to accomplish our lost load height."

The NXT18 will be the first in the new series to come equipped with electronic controls for more efficient operation of the hooklift. The new system offers two-speed operation to allow for slowing the unit down for precise control in various situations. The new series will be introduced with a radio remote control to allow for unit operation in either the chassis cab or standing outside of the chassis cab.

The hooklift will be available at distributors later this year. For more information, visit www.stellarindustries.com.

NTEA – The Association for the Work Truck Industry announced a collaboration with Commercial Truck Trader and S&P Global Mobility (formerly the automotive team at IHS Markit) to provide commercial vehicle life cycle trends and intelligence to the work truck industry.

On May 1, 2022, the Seattle Department of Transportation (SDOT) participated in this year's "Touch-A-Truck" event, hosted by the Junior League of Seattle at Magnuson Park.

T-Mobile announced on May 9 that Battle Motors has selected the Un-carrier as the preferred provider of IoT connectivity and management for thousands of new Battle Motors battery electric trucks rolling off the Ohio-based production line.

Volvo is now introducing fossil-free steel in its trucks. The steel is produced by the Swedish steel company SSAB and the heavy-duty electric Volvo trucks will be the first to include it, the company said.