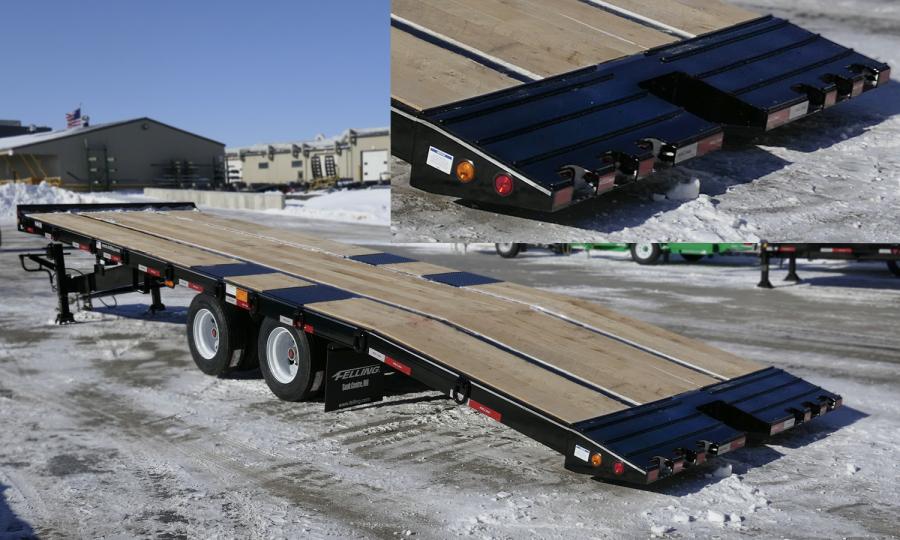 The modified design of the fixed approach ramp for the Felling Air Tilt.

The Felling Trailers' Air Tilt model has undergone design modifications to increase operator ease of use and safety.

One of the more notable updates was the fixed approach ramp, which was extended in length from 14 to 22 in.

"The new design offers a shallower approach angle to improve loading of compact construction equipment such as skid steers and mini excavators. Equipment designs are ever-changing, so it only makes sense to make modifications to keep in step," said Nathan Uphus, Felling's sales manager.

Air Tilt models with the new fixed approach ramp design were put into production in the spring of last year and put into service for customers by mid-year.

The Air Tilt product line was first released to the trailer industry in early 2010. Initially, the model line consisted of the FT-40-2 TA and FT-50-3 TA. Over the past 10-plus years, the model line has expanded to offer six models, with payload capacities ranging from 19,700 to 50,000 lbs.

The Air Tilt's (TA's) unique design utilizes air, powered from the tow vehicle, to tilt the trailer and optional ramps, eliminating the need for hydraulics. The air power from the tow vehicle fills two airbags (four airbags optional), which then raise the trailer smoothly; the airbag will then keep the deck in the tilted position to allow for loading/unloading of multiple pieces of equipment.

Enhanced towing capability and balance were achieved by placing the axles further back on the Air Tilt model than other tilt trailers on the market, according to the manufacturer.

Proper tire maintenance is critical in the performance of all on-road equipment. Installing a tire inflation system on your side dump trailer is one way to reduce costs and keep your trailer moving.

Felling Trailers Inc. Announces Beneficiary of 2022 Trailer for a Cause →

Felling Trailers will be hosting its 10th annual Trailer for a Cause online auction of an FT-3 Utility trailer to benefit a nonprofit organization.