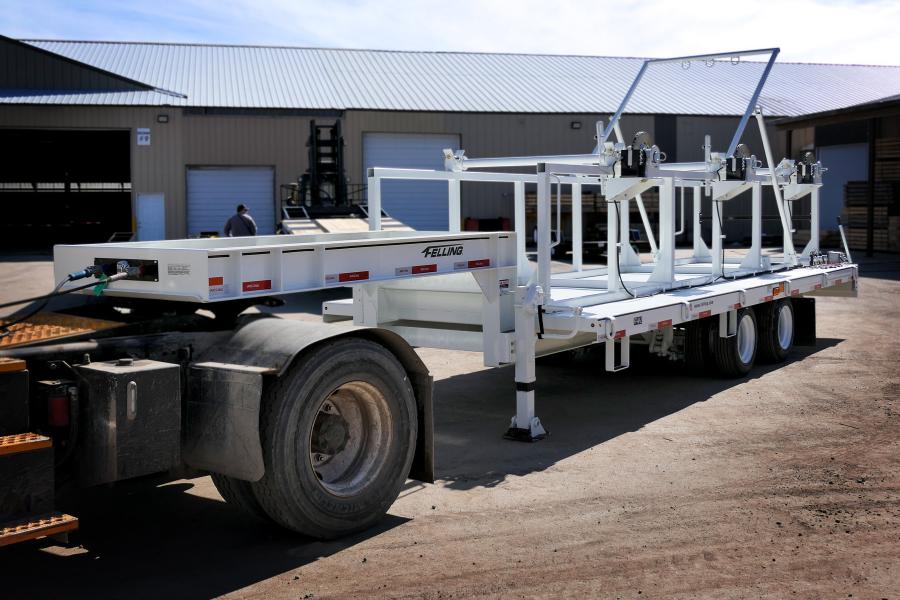 The customized Felling FT-40-2 triple reel trailer before being shipped and put into service.

A customer needed to replace an older antiquated fleet asset. The replacement trailer would be used to transport, payout and install underground conductor without damaging the material.

When installing an underground conductor, precautions must be taken to ensure the integrity of the material being paid out.

The application the trailer would be used for would require the ability to transport three reels, each equipped with a tensioning brake system that could be operated by one person from a centralized location.

The trailer also would need to have a fifth-wheel style hitch with air brakes.

The assembly consisted of (3) 86 in. diameter by 52 in. wide by 7,000 lbs. reel bars equipped with hydraulic tensioning brakes.

Felling Trailers' hydraulic tensioning brakes are equipped with hydraulic accumulators. These assure smooth operation of the tensioning brakes by absorbing pressure changes that develop due to rotor intolerance and heat buildup. A single, double-acting hand pump can provide hydraulic pressure to all the calipers at the same time. Each brake circuit can be isolated and controlled individually if the need arises.

Felling Trailers accomplished this by incorporating a control bank on the rear roadside of the trailer. From this control bank, a single operator can manage the hydraulic tensioning brakes of all three reels and access the double-acting hand pump.

To ensure the integrity of the material, the trailer was equipped with two booms: an adjustable overhead boom, with 126 in. raised height from deck floor and a retractable rear boom that would extend 36 in. beyond the rear of the trailer when deployed.

The overhead boom has two positions: a lower position to keep the overall height legal during transport and the raised position, when on-site, the boom is raised and paying out material.

The underground conductor is routed through stringing blocks hanging from the boom. This assures the cable can be paid out without coming in to contact with anything that may damage the insulation. From the overhead boom, the conductor then travels to the rear boom.

The rear-telescoping boom extends out the back of the trailer. It, too, is equipped with stringing blocks. This system allows the conductor to travel unobstructed from the reels to the final point of entry into an underground duct, vault or trench.

To meet the hitch specification, Rapp worked with Felling Trailers' weld team to design and build a custom H-frame gooseneck hitch with kingpin. The custom set up delivered a 50 in. fifth wheel height, 16 in. set back and 62 in. swing clearance from the kingpin back to the gooseneck, providing the customer with ample height and clearance for their application.

Proper tire maintenance is critical in the performance of all on-road equipment. Installing a tire inflation system on your side dump trailer is one way to reduce costs and keep your trailer moving.

Felling Trailers Inc. Announces Beneficiary of 2022 Trailer for a Cause →

Felling Trailers will be hosting its 10th annual Trailer for a Cause online auction of an FT-3 Utility trailer to benefit a nonprofit organization.

SmithCo Side Dump Trailers hired David Jacobs as the company's director of manufacturing. Jacobs will oversee daily production of SmithCo's side dump trailers, as well as develop plans to bring the company's performance and capacityto even higher levels.

Felling Trailers continues to go "green" with its air operated bi-fold ramps system. The air bi-fold ramps system, which first debuted at ConExpo-Con/AGG 2020, is part of Felling's controlled flow air ramp series, which the company launched more than a decade ago.