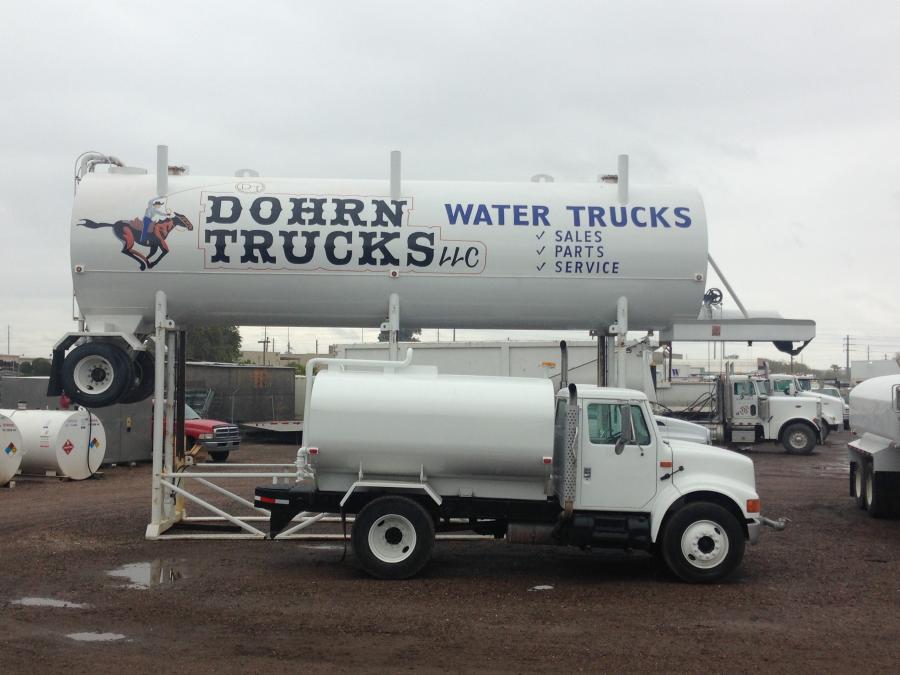 Maverick specializes in buying quality used trucks, then refurbishing the truck chassis and outfitting them with new tanks, plumbing and other water optional equipment.

Dust suppression is a concern of contractors everywhere, especially those located in the southwest desert. Stringent federal regulations filter down to state and the local levels. The non-compliance with these regulations can result in thousands of dollars in fines.

It is not surprising that Maricopa County, Ariz., and specifically the Phoenix area, have become the epicenter for the manufacturing of water trucks. This being the best and the most common solution for the problem of dust control.

Among the manufacturers that call this area home is Maverick Equipment LLC. Maverick specializes in buying quality used trucks, then refurbishing the truck chassis and outfitting them with new tanks, plumbing and other water optional equipment. According to Rick Dohrn, owner of Maverick, this approach can save the buyer of up to 50 percent off the cost of a new truck.

It was not dust that first motivated Dohrn to start building water trucks. The business was born from a need he identified while operating the paving/milling contracting business he founded in 1985. His earliest trucks were designed to meet specific needs of the milling machines that his business productivity relied on.

Rotomill machines utilize water to cool the drums and teeth, thus extending the life of both. Because each machine has up to 160 teeth, and replacement costs are approximately $6/tooth, reducing the wear on them can equate to big savings.

The tanks on a rotomill hold 1,250 gal. (4,732 L), which created a productivity issue for Dohrn. The 2,000 gal. (7,570 L) water truck in use at the time did not meet the needs to refill two machines efficiently, often having to re-fill the tank multiple times to accommodate the water needed.

Dohrn then decided to design and built a 2,500 gal. (9,463.5 L) tank for his own use, allowing two machines to be refilled from a single trip and setting a standard others in the industry would follow.

He then built water trucks on a small scale during the early 2000's, mainly for his own use. In 2005, he decided to sell the paving/milling business and turn his focus to building water trucks and promoting the Maverick Water System name brand.

Today, all Maverick trucks are custom built to meet the specific needs of the customers. The interior of every tank features epoxy coating, which extends the life of the tank, giving it twice the amount of the service compared to untreated steel tanks. Standard features also include an 8 ft. (2.44 m) rear pressurized spray bar and cab controlled suction plumbing for canal fill capabilities.

“We incorporate all of our customer's favorite features into our standard truck,” Dohrn said.

Popular options on a Maverick unit include a 360-degree directional spray water cannon — which can be used to spray up to 185 ft. (56.4 m) to specific areas at distance from the truck; and a duckbill side spray — used to spray difficult places to access, such as mountainous areas or hillsides. Both features help to reach and distribute the water evenly.

Maverick trucks are built primarily on Kenworth and Peterbilt frames, but Dohrn reports that the new 2016 Fords with standard automatic transmission are now becoming just as popular.

The 4,000 gal. model requires a modified wheel base and beefed up frame. Maverick does both modifications at the shop facility in Chandler, Ariz.

Dohrn said customers are happy with his policy of quoting a single price that includes design, customization, build and freight. He noted that customers often want a truck delivered within days, and he does whatever possible to accommodate their needs.

“We deliver all units and build the freight cost into the selling price. Normally when a customer wants a truck, they have an immediate need. If the buyer wants the truck on short notice, I'm able to say yes and then deliver on the promise,” Dohrn said.

Maverick ships trucks nationwide, as well as into Canada and to overseas markets. Dohrn said in addition to contractor clients, there also is a demand for his product from energy companies, particularly for dust control at coal-fired power plants; fire departments; and municipalities.

Domestically, Arizona and California are Maverick's top two markets. Dohrn anticipates an increased demand in 2016 for the entire Maverick product line. With 30 years of experience in the Phoenix area, he is confident that he understands the needs of his clients and future customers.

Stellar has launched the TMAX 1-11 welder body to the market. The TMAX welder body is ideal for utility, mine and construction job sites.

Kenworth of Pennsylvania – Muncy has relocated to a larger parts and service dealership to accommodate the growing needs of local truck fleets, owner operators and truck operators traveling through the area.

They say that the devil is in the details. For a company that has been around since 1923 and employs more than 700 employees, E.R.

Kenworth offers the 15-in. digital display system as standard equipment on Kenworth T880 and W990 models.