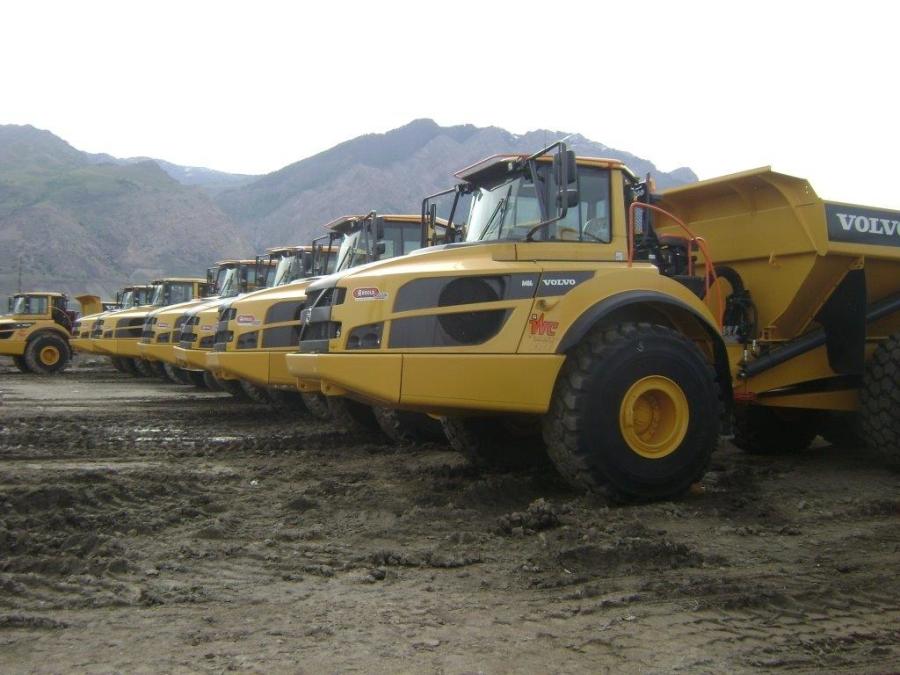 Hired by the Weber Basin Water Conservancy District, its job is to take the 14.5-mi. (23.3 km) dike back to its original height when it was first completed in 1964. Willard Bay is a freshwater reservoir that collects water from the Ogden and Weber rivers that's diverted into the dam by pipes.

It's a favorite recreational area in northern Utah, where people enjoy boating, fishing, water skiing and swimming. Its original purpose was to supply irrigation water to farmers, which the dam still does. According to estimates, the two additional feet could add up to 20,000 more acre feet of storage, or six billion gallons.

There was no concrete or asphalt used on this job. But, over 100 tons (90.7 t) of granular borrow was brought in from Geneva Rock, and 500 cu. yds. (382 cu m) was mined from the site. Whitaker found that the existing dike had settled 2 to 4 ft. (.6 to 1.2 m), so many additional materials were brought in to build the elevation back to where it had originally been. In total, 72,000 tons (65,317 t) of rip-rap armoring was used to minimize erosion and to keep it from washing out from the movement around the shoreline.

At the beginning of the nine-month project roads were built to give equipment and workers safer and quicker entrance to the site.

Mike Whitaker explained, “A haul road was created for easier access, and to make the work that needed to be done much simpler. The road that was built was done so well, that a plane could have safely landed on the pathway.”

At the beginning of the project, a six-week delay was experienced with an unseasonable amount of rain. This created a land swell as the water on top migrated back into the road that was built to move material. After a few minor repairs, the development was back on track.

A crew of 30 to 40 people worked seven days a week at the site. Various dozers, excavators and 30 to 40 highway trucks were kept busy hauling clay and other materials to the site. Three 8,000-gal. (30,283 L) water trucks were used to help keep the dust down. Whitaker Construction also elected to use 11 new Volvo A40G articulated haul trucks from Arnold Machinery Company. Their long relationship with Arnold Machinery, and their high confidence and experience with Silver Service, were just part of the deciding factors for them to use the Volvo products from Arnold Machinery.

“Our longstanding relationship with Arnold Machinery, the availability of equipment and our faith and confidence that our needs will be met and they will always be there gives us the assurance that we need when working on large and small projects,” said Mike Whitaker.

Given the scope of the work done by Whitaker, there was very little disruption to the recreational area and users. On occasion, people had to wait as equipment hauled materials in and out of the site. The fishermen, boaters, water skiers and farmers in the area are happy with the improvements that have been done to the area.

One woman mentioned how nice it was to hear the water splashing against the rocks. “It is nice to have a different sound coming out of the dam,” she said.

Willard Bay also serves as a wildlife watching area for nesting eagles and other birds and animals. The project will be ongoing as they continue to re-vegetate the area to bring it back to its natural state by replenishing the shrubs, soil, grass, weeds, flowers and other vegetation that was there when the project began. The additional height and width added around the dike will be able to supply additional water that will serve both the wildlife and community well.

Stellar has launched the TMAX 1-11 welder body to the market. The TMAX welder body is ideal for utility, mine and construction job sites.

Kenworth of Pennsylvania – Muncy has relocated to a larger parts and service dealership to accommodate the growing needs of local truck fleets, owner operators and truck operators traveling through the area.

They say that the devil is in the details. For a company that has been around since 1923 and employs more than 700 employees, E.R.

Kenworth offers the 15-in. digital display system as standard equipment on Kenworth T880 and W990 models.